Vocareum supports multiple "versions" for a part. In this context version refers to different problems that each have exactly the same grading rubric and can be substituted for another. When the student submits his/her solution (s)he needs to submit solution for only one of the versions. The version can either be randomly selected by the platform or selected by the student depending on the configuration option. To use the feature, first set the option "Multiple Versions" to ON in the Option  section  for the part -

If you select "Random" then the platform will randomly assign a problem version to the student. Otherwise, the student will have the option of deciding which version of the part to submit.

Now, when you go to "Configure Workspace" you should see a button called "Version" to define multiple versions of the same part -

After creating the Version you will now see a selection for which Version of the part you are working on. 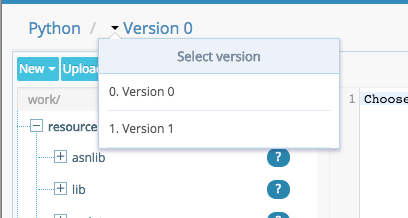 You can use it to create various resources for that version of the part by using this selection.