Written by David
Updated over a week ago

Vocareum provides pre-built image for your projects. But you can create customer docker images by adding packages or services to images provided by Vocareum. Please contact Vocareum support if you need a different base image than what is provided as a starting point.

You must create at least one part to be able to create your own image. While the image created is available for use anywhere in the lab, you need access to "Configure Workspace" IDE to build the image. This workspace is always associated with a part that has been created. Go to the "Edit Assignments" page.

Select "Configure Workspace" for any part in the lab

You can either create a new image from scratch or edit a previously-built image. 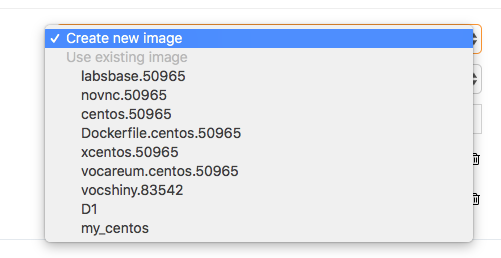 This name should be unique across the entire course. As mentioned before, even though the image is built in the "Configure workspace" for a specific part, it can be used in any part of the course.

Vocareum provides built-in images as a starting point. You can modify these or contact Vocareum if you want to start with a new base image -

Note that the default interface can be overridden by specifying your own "Access" method.

This is the Dockerfie used for the build. See more details in the section here.

If the build succeeded, you should see the message "success". If there was an error in the message you can use the message panel to see the error from docker build process.

If the image was successfully built, it is now ready to be used when you configure the lab.